This is a work in progress.

Thus, I keep trying…. but this time with a few rules.

Rule 1: Drawing From Yourself 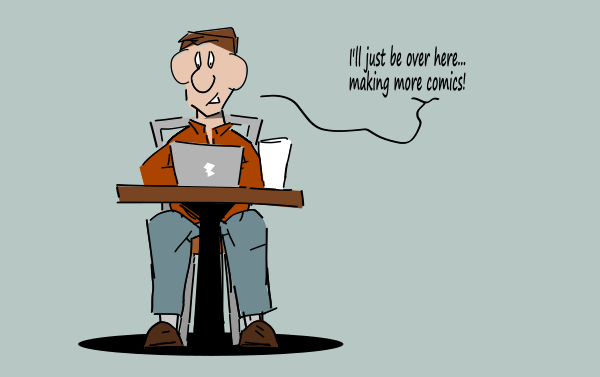 The first web comic I ever published was a series of strips that were trying waaaaaaaaaaay too hard to be insightful observations of life. Unfortunately my observations of life were about as weak as my art. Cliche. Trite. A little too new age, which surprised even me because it wasn’t who I thought I was. It didn’t go very far.

I don’t want to imply in the slightest that This is Pi Day is in any way some rolling success. It might still completely flop. It might land on it’s modestly drawn face and never get back up. That said, my third attempt at a web comic has felt more successful because I’ve moved the element of “I’m making this all up” one level closer to reality.

With This is Pi Day I’ve been drawing from my own life for inspiration.

Rule 2: Selling Your Odd Self

She asked: “So are you going to send your comic to the newspaper to see if they’ll print it?”

That tactic worked exactly once: when I was in University the campus newspaper would print any comic that met the formatting guide and did not break the editor’s rules for “appropriate content” whatever. One submitted it by sliding it under the door… and then watching the paper for the next few weeks.

I tried to give my mom a simple explanation of the nuanced workings of comic publishing syndicates countered against the decline in print media… but the short answer was, no, mom: it doesn’t work that way. 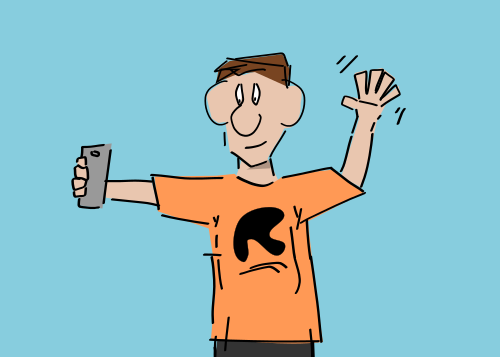 I doubt my comic is publishable at all, actually. It may be the most normal thing I’ve ever drawn, but it doesn’t fit into that rigid framework that ink-and-paper publishers, even the small-city rags still published where my folks live, that those folks are willing to invest in. It’s too odd. To eclectic. Too clean to be edgy. Too subtle to be mainstream. Too much like the work that inspired me. Too different to fit into the space provided.

There is no easy track to getting people to read this thing.

Instead, for every hour that I spend drawing I end up spending another two doing this voodoo science called marketing, wherein I attempt to push a link into the universe, to put it in front of someone who might click on it. I do this simply because I want people to look at what I made. I’m not making any money doing this: it’s purity vanity… with a dash of going to sleep each night thinking that I added something positive to the world, even if it is something a little bit odd.

The problem is that we live in a mass media market, and me, I’m the equivalent of the little pie shop on the corner, competing against every chain Mc-Horton-Bucks on every other corner. I might make good pie, but to sell a single slice I have to post five times on Twitter, three times on Facebook, once on Instagram, and reply to at least two fans who want to ask great-but-resource-consuming questions about my recipe. It’s a labour or love, and I love it… but that doesn’t mean I don’t wish it was easier. Fans are great, but even unless they are sharing or liking or forwarding or re-posting or something, every click, every view, every read that trickles across my comic is earned through that time I need to spend promoting my odd self. It’s a tough slog.

With This is Pi Day I’ve been promoting this notion that it’s important to support that. And I think it’s made me a better internet citizen, too.