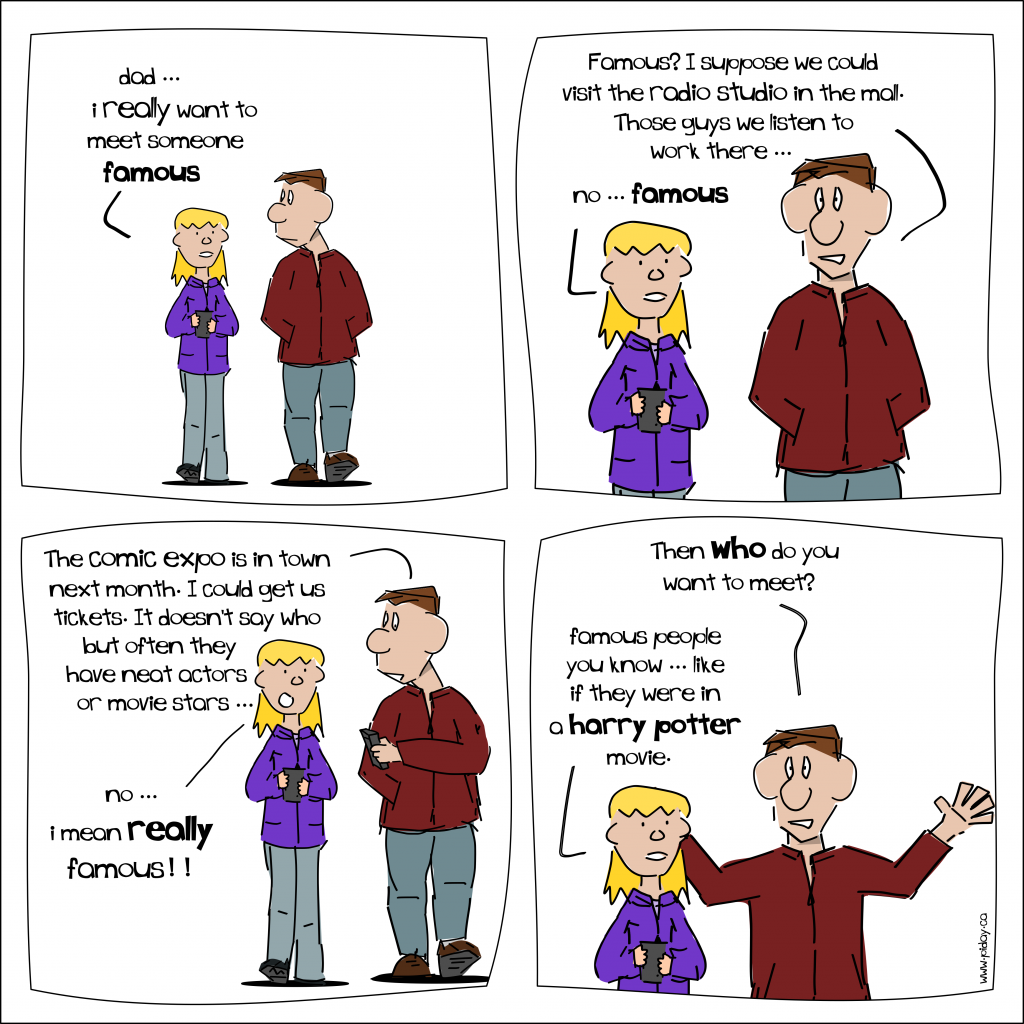 Books. Films. Costumes. Themed birthday party planning, even though the birthday party in question is almost half a year away. She makes spreadsheets about her fan-ness… is that even normal? I don’t even know!

Thus, I had this exact conversation with the Girl the other week.

See, I’ve had this weird streak of vacation …uh… let’s call them encounters. None of the celebrities in question would vaguely recall meeting me of course, but my side of the “well, that was cool” memory vault goes something like this: we went a cruise and Wil Wheaton was on board, we travelled to London and randomly stumbled upon Prince Charles and his new wife, I went to New York and was in a bar with Neil Patrick Harris, I went to New York again and had a lovely chat and some high-fives with Drew Barrymore in Central Park… you know… just not-famous me randomly meeting some genuinely actually-famous people.

I don’t write this to name drop (not completely) but rather to provide some context as to why, naturally, the Girl assumes that encountering famous people in real life is just a matter of… what? Maybe just willing it so…

That said, apparently what qualifies as “famous” to a ten year old is definitely a little narrower than what fit my definition.

How do you turn a pirate furious? Take away the ‘p’.

What keeps you awake at night?

If you’re a parent, it’s probably worrying about your kid, their future, your future, the inevitable pains and pressures of puberty approaching more rapidly than you could have ever imagined, paying for college, hoping for health and happiness and them never getting hurt, at least no more than they can walk off or learn from and then get on with living their lives to their full potential.

Or, y’know… whatever scary critter your dad happened to show you right before bedtime because he thought it would be great idea to catch up on some old movies.

Hopefully you enjoyed another bonus week of comic shorts and this week’s week of movies… week. Why not take a break from flipping through your old film collection to share this post with a friend? Go on… I’ll save you some popcorn.